I wish I had a dime for every time a training, learning & development, or line manager has told me, “I need a program on influence skills.” After all, part of Organizational and Political Savvy is the ability to sell your ideas–– to influence. But too many curriculum planners fail to target with enough precision the exact category of “influence skills” behavior change or improvement is required by a target population. So “Influence Skills” has become a wastebasket, catch-all term. I hope this blog helps you to distinguish between four dimensions of INFLUENCE, so that you are more strategic before installing a training course on the subject.

Four dimensions of “influence skills” exist, so clients can now differentiate between these levels to optimize target populations’ expertise and growth. Each dimension is “necessary but not sufficient,” and each requires a different learning solution. Here, then, is the Influence Dimensions Pyramid. 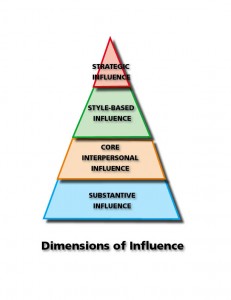 1) Substantive Influence– The foundation of influence is the validity and soundness of the content or idea itself. Your competence and recommendation/proposal itself must be compelling, well-documented, accurate, solid in its business rationale, and clearly packaged. This entails task level training, on-the-job competence building, mentoring, and technical development. The substantive influence dimension is especially vital for buy-in from what our programs teach as the “Power of Ideas” Political Style, but no stakeholder will approve a recommendation, proposal, or initiative if the idea itself doesn’t hold water.

2) Core Interpersonal Influence- Many influence courses teach fundamental communication skills, such as Listening and Speaking skills to gain Agreements (Ridge Training), Advocacy and Inquiry skills with “push” and “pull” tactics (Forum, Barnes and Conti, Situational Management Institute, etc.), and/or alternative structures for packing “influence message” into formats or templates (e.g., “Hook-Point-Value” or “Idea-Action-Value,” etc.). Whether focusing broader interaction skills, packing formats for content, or platform presentation skills,  this level of influence programs targets the interpersonal dimension of influence as the building block, because even the best idea poorly conveyed or done in either a passive or aggressive, versus interactive, collaborative fashion will fall on deaf ears.

3) Style-Based Influence- A higher level of influence astuteness entails style-based influence. Most often, this involves communications-oriented style models: SOCIAL STYLES models taught Ridge, Wilson Learning, Tracom Corporation, etc. (Driver, Analytic, Expressive, or Amiable), DISC, The Four Colors models, all of which are similar and helpful. Myers-Briggs Type Indicators (MBTI) and the Whole Brain models (the Hermann companies) address how people perceive, decide, learn, or think. Other style-based models include Enneagrams, Personalysis, Five Dynamics tool, and Psychological Associates. All such style based influence dimension models overlap  a bit with the core interpersonal dimension, and all entail “flexing” to achieve harmonious and productive interaction, all appeal to style-based preferences, and all reduce style-based tensions that might interfere with an idea’s acceptance, regardless of it’s substantive validity or your interpersonal effectiveness in communicating the idea.

4) Strategic Influence- Here is where most influence training falls short, but assuming that any or all of the previous Influence Dimensions will be enough to win the day. Until recently, very little structured training has existed on this strategic influence dimension related to four (4) “P”s increasingly impacting one’s degree of influence, regardless of how effective one is in the previous three levels of influence (Substantive, Interpersonal, and Style-Based):

* Politics– Navigating within the political arena is essential for knowing the unwritten rules, the real way decisions are reached, and handling sabotage/deception.

* Power– Knowing who officially holds formal or informal power, knowing how to speak truth to power, respecting ego and turf, lobbying ideas to stakeholders, and challenging ideas are vital in today’s complex, turbulent, and volatile organizations.

* Perception– The role of perceptions in how decisions are made is critical for optimal influence, so politically savvy, agile leaders know how to assess their own and their team’s corporate perception and reputation–– fair or unfair, accurate or not–– and how to consciously craft a plan to alter negative perceptions. A cornerstone of effective ethical political influence inside of companies and government agencies certainly is “impression management.”

* Promotion– Astute leaders never over-promote their contributions or take undue credit for ideas and outcomes, but they also avoid becoming the “best-kept secret” in their companies or agencies. “Balanced, High-Integrity Self-Promotion” and promoting one’s team is a hallmark of the politically savvy, strategically influential leader.

Beyond the Wastebasket Approach. Hopefully, this break-down of INFLUENCE as a waste-basket, overly generalized competency will assist consultants and their performance improvement clients to better explore the optimal influence-oriented learning solutions for their target populations, leadership competency models, business problems and performance gaps. While there are scores of program for the first three dimensions of influence on the Influence Pyramid, you can probably count on one hand the number of proven, research-grounded, structured leadership development programs addressing the strategic influence dimension. It’s fulfilling to see our Organizational Savvy training course, assessment tools, and Wall Street Journal best seller text (Survival of the Savvy, 2004, Free Press) make such a significant impact on organizations seeking to install a more comprehensive, advanced approach to what otherwise is a wastebasket subject matter of “influence skills.”

Can’t think of a vendor relationship I value more highly … The course material, content and delivery were exceptional. The participants … have spread the word that this was one of the best course they have ever taken. Our offerings… “Citigroup”

Extremely applicable in all aspects of life. Good framework for demystifying politics and approach. Rick was a dynamo, engaging, effective and knowledgeable, experienced…It was all great, good use of humor. Rick is a fabulous presenter-very engaging!